Friendship bracelets seem to be appearing on the wrists of everyone from children to grandparents. These bracelets are often made of embroidery thread or yarn and can be woven into many intricate patterns. Some are even made with beads woven into the design. Making friendship bracelets is a fun project for any age, and with so many patterns available, there is a design that is right for any skill level. Friendship bracelets are not only beautiful and interesting, they also carry special meaning for the person who made it and the friend who wears it.


The History of Friendship Bracelets

Knot-tying arts have developed independently in different parts of the world. Some of the earliest decorative knots from China still in existence today are from the period 481 to 221 B.C., according to the County of Middlesex Cultural and Heritage Commission. Over time, the Chinese developed many uses for knots, including clothing decoration, buttons and household objects.


Macrame, a craft of tying knots to create intricate patterns, is said to have developed in 13th-century Arabia. Arabian weavers are thought to have started creating knotted patterns with the fringe at the edges of items made on a loom. In following centuries, the practice traveled to Italy and France.


Sailors picked up this knot-tying practice to pass the lectime at sea. To this day, the basic knots used in macrame are the same knots that are an invaluable part of the sailors' knot-tying repertoire: the half knot, the square knot and the half hitch knot. Macrame became popular in 19th-century Britain and was revived in the U.S. in the 1960s; although its popularity waned in the following decades, macrame appeared alive and well during the beginning of the 21st century. 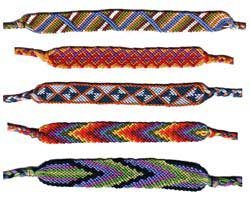 Because the candy stripe friendship bracelet is a rather simple and common form, it is a good one for beginners. To begin, three strands of embroidery floss 60 inches long are needed. The floss strands are held lengthwise and folded in half. A knot is made at the looped end, leaving a loop about one-half inch at that end of the bracelet. This loop may be taped to a table or chair or pinned to a craft pillow while the bracelet is knotted. 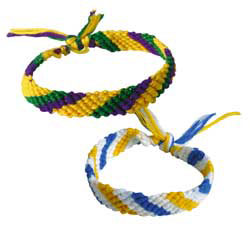 The piece of floss on the far left is brought up over the second string so it resembles the shape of the number four and is then pulled back around the second string through the opening of the four. This sequence is repeated in the same manner with the same two pieces of string to form two identical knots. Working in this same manner, the first string is used to tie knots on the third string, and then each successive string until the end of the row is reached.


The process is continued with the new string on the farthest left, which is now used to tie knots on each successive string. Rows are added until the bracelet reaches the desired length. At this point, the strands are separated into two separate groups, and each group of three strands is braided until it is at least four inches long and then knotted. The ends of strands are then trimmed.


Variations of the Friendship Bracelet
Patterns for more complex friendship bracelets made from floss, such as chevron, hearts or double chevron as well as others, are available on websites such as How to Make Jewelry.